Before understanding the causes, symptoms and other roots associated with the disorder, understanding the term anxiety is the first step. It refers to the anticipation of a future concern and is more associated with muscle tension and avoidance behaviour. It is a feeling of unease, such as worry or fear, that can be mild or severe. Everyone has feelings of anxiety at some point in their life – for example, you may feel worried and anxious about sitting an exam, or having a medical test or job interview.

In addition to anxiety, people often also have physical symptoms, including shortness of breath, dizziness, sweating, rapid heartbeat, and/or tremor.
They often substantially change people’s daily behaviour, including leading them to avoid certain things and situations. These disorders are diagnosed using specific established criteria. Drugs, psychotherapy, or both can substantially help most people.
It is a normal response to a threat or to psychologic stress. Normal anxiety has its root in fear and serves an important survival function. When someone is faced with a dangerous situation, it triggers the fight-or-flight response. With this response, a variety of physical changes, such as increased blood flow to the heart and muscles, provide the body with the necessary energy and strength to deal with life-threatening situations, such as running from an aggressive animal or fighting off an attacker.

However, it is considered a disorder when it

The causes are not fully known, but the following may be involved:

When a person’s response to stresses is inappropriate or a person is overwhelmed by events, an anxiety disorder can arise. For example, some people find speaking before a group exhilarating. But others dread it, becoming anxious with symptoms such as sweating, fear, a rapid heart rate, and tremor. Such people may avoid speaking even in a small group.

Anxiety tends to run in families. Doctors think some of this tendency may be inherited, but some are probably learned by living with anxious people.

Drugs that can trigger anxiety include the following:

Alcohol
Stimulants (such as amphetamines)
Caffeine
Cocaine
Many prescription drugs, such as corticosteroids
Some over-the-counter weight-loss products, such as those containing the herbal product guarana, caffeine, or both
Withdrawal from alcohol or sedatives, such as benzodiazepines, can cause anxiety and other symptoms, such as insomnia and restlessness.

Everyone feels anxious now and then. It’s a normal emotion. For example, you may feel nervous when faced with a problem at work, before taking a test, or before making an important decision. Anxiety disorders are different, though. They are a group of mental illnesses, and the distress they cause can keep you from carrying on with your life normally. For people who have one, worry and fear are constant and overwhelming and can be disabling.
To help diagnose a generalized anxiety disorder, your doctor or mental health professional may:

1. Do a physical exam to look for signs that your anxiety might be linked to medications or an underlying medical condition
2. Order blood or urine tests or other tests, if a medical condition is suspected
3. Ask detailed questions about your symptoms and medical history
4. Use psychological questionnaires to help determine a diagnosis
5. Use the criteria listed in the Diagnostic and Statistical Manual of Mental Disorders (DSM-5), published by the American Psychiatric Association 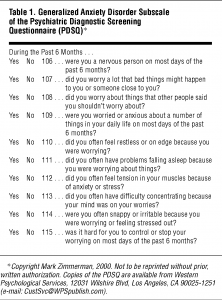 Could you be suffering from a disorder? take this self-assessment test https://www.psycom.net/anxiety-test

People with the disorder have very strong feelings of worry, unease or fear. They are more anxious than most people would be in the same situation.

They may go out of their way to avoid things, people, events or places that make them anxious.
Each of these disorders is distinct in some ways, but they all share the same hallmark features:
irrational and excessive fear
apprehensive and tense feelings
difficulty managing daily tasks and/or distress related to these tasks.
Cognitive, behavioural and physical symptoms include:

predictions (e.g., “I’m going to fumble my words and humiliate myself”)

avoidance of activities that elicit sensations similar to those experienced when anxious (e.g., exercise)
subtle avoidances (behaviours that aim to distract the person, e.g., talking more during periods of anxiety)
safety behaviours (habits to minimize anxiety and feel “safer,” e.g., always having a cell phone on hand to call for help)

excessive physical reactions relative to the context (e.g., heart racing and feeling short of breath in response to being at the mall).

The physical symptoms may be mistaken for symptoms of a physical illness, such as a heart attack.

Managing Symptoms
These tips may help you control or lessen your symptoms:

Cut down on foods and drinks that have caffeine, such as coffee, tea, cola, energy drinks, and chocolate. Caffeine is a mood-altering drug, and it may make symptoms worse.
Eat right, exercise, and get better sleep. Brisk aerobic exercises like jogging and biking help release brain chemicals that cut stress and improve your mood.
Sleep problems and anxiety disorder often go hand in hand. Make getting good rest a priority. Follow a relaxing bedtime routine. Talk to your doctor if you still have trouble sleeping.
Ask your doctor or pharmacist before taking any over-the-counter meds or herbal remedies. Many contain chemicals that can make the symptoms worse.

Generalized anxiety disorder involves persistent and excessive worry that interferes with daily activities. This may be accompanied by physical symptoms, such as feeling restless, fatigue, inability to concentrate, muscle tension or problems sleeping. Often the worries focus on everyday things such as job responsibilities, family health or minor matters such as chores, car repairs, or appointments.

The core symptom of panic disorder is recurrent panic attacks, an overwhelming combination of physical and psychological distress. During an attack several of these symptoms occur in combination:

Palpitations, pounding heart or rapid heart rate
Sweating
Trembling or shaking
Feeling of shortness of breath or smothering sensations
Chest pain
Feeling dizzy, light-headed or faint
Feeling of choking
Numbness or tingling
Chills or hot flashes
Nausea or abdominal pains
Feeling detached
Fear of losing control
Fear of death
Because symptoms are so severe, many people who experience a panic attack may believe they are having a heart attack or other life-threatening illness and may go to a hospital ER. Panic attacks may be expected, such as a response to a feared object, or unexpected, apparently occurring for no reason. The mean age for the onset of panic disorder is 22-23. Panic attacks may occur with other mental disorders such as depression or PTSD.

A specific phobia is an excessive and persistent fear of a specific object, situation or activity that is generally not harmful. Patients know their fear is excessive, but they can’t overcome it. These fears cause such distress that some people go to extreme lengths to avoid what they fear. Examples are fear of flying or fear of spiders.

Agoraphobia is the fear of being in situations where escape may be difficult or embarrassing, or help might not be available in the event of panic symptoms. The fear is out of proportion to the actual situation and lasts generally six months or more and causes problems in functioning. A person with agoraphobia experiences this fear in two or more of the following situations:

Using public transportation
Being in open spaces
Being in enclosed places
Standing in line or being in a crowd
Being outside the home alone
The individual actively avoids the situation, requires a companion or endures with intense fear. Untreated agoraphobia can become so serious that a person may be unable to leave the house. A person can only be diagnosed with agoraphobia if the fear is intensely upsetting, or if it significantly interferes with normal daily activities.

A person with a social anxiety disorder has significant anxiety and discomfort about being embarrassed, humiliated, rejected or looked down on in social interactions. People with this disorder will try to avoid the situation or endure it with great anxiety. Common examples are an extreme fear of public speaking, meeting new people or eating/drinking in public. The fear or anxiety causes problems with daily functioning and lasts at least six months.

6.Separation Anxiety Disorder
Separation anxiety disorder is being excessively fearful or anxious about separation from those with whom he or she is attached. The feeling is beyond what is appropriate for the person’s age, persists (at least four weeks in children and six months in adults) and causes problems functioning. A person with a separation anxiety disorder may be persistently worried about losing the person closest to him or her, may be reluctant or refuse to go out or sleep away from home or without that person, or may experience nightmares about separation. Physical symptoms of distress often develop in childhood, but symptoms can carry through adulthood.

Psychotherapy
Psychotherapy or “talk therapy” can help people with anxiety disorders. Psychotherapy must be directed at the person’s specific anxieties and tailored to his or her needs to be effective.

Cognitive Behavioral Therapy (CBT) is an example of one type of psychotherapy that can help people with anxiety disorders. It teaches people different ways of thinking, behaving, and reacting to anxiety-producing and fearful objects and situations. CBT can also help people learn and practice social skills, which is vital for treating social anxiety disorder.

Medication
Medication does not cure anxiety disorders but can help relieve symptoms. Doctors prescribe medicines for anxiety, such as a psychiatrist or primary care provider. Some states also allow psychologists who have received specialized training to prescribe psychiatric medications. The most common classes of medications used to combat anxiety disorders are anti-anxiety drugs (such as benzodiazepines), antidepressants, and beta-blockers.

Antidepressants are used to treat depression, but they can also be helpful for treating anxiety disorders. They may help improve the way your brain uses certain chemicals that control mood or stress. You may need to try several different antidepressant medicines before finding the one that improves your symptoms and has manageable side effects. A medication that has helped you or a close family member in the past will often be considered.

OVERVIEW Narcissistic personality disorder (NPD) is a mental condition  which people have an inflated sense of their own importance. It often involves a pattern of self-centered, arrogant...
Read more

Somatic symptom disorder (SSD) occurs when a person feels extreme anxiety about physical symptoms such as pain or fatigue. The person has intense thoughts,...
Read more

Generalized Anxiety Disorder is one of the most common anxiety disorders and affects approximately 3.1% of the American adult population. With 6.8 million reported...
Read more